I must say that Budapest is truly a beautiful city when you look beyond the rundown houses, the riots on the street, the unhappy people and the bad weather... There a lot of really beautiful buildings from different epochs in history. The 2nd day we were there we went sightseeing the whole day in pouring rain. So here a few snippets: 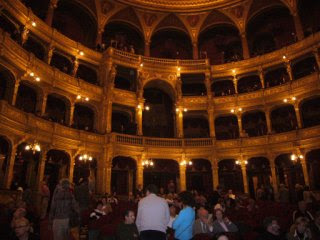 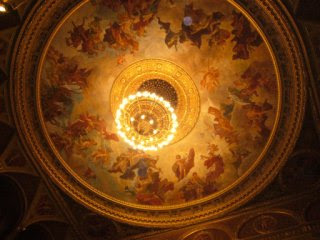 So as you can see it is simply pretty. I had the feeling that Budapest is exactly the way you would imagine a city in an East-European country. And not only that, even the people look like you would imagine it.

On the third day we went to the House of Terror and they presented two opposite dicatorships ruling over the country. During the 2nd world war it was the Nazi regime and after the World War 2 it was the Communists. Hungary truly has suffered from both dictatorships and you can still scent the past and the history when you walk among the city.
And then you look at these old buildings which are from a time and age when the Austrian Empire was still alive and Queen Elisabeth was still ruling over Hungary.
Now you look at a city with all those historical backgrounds and still you see poverty, fear and dissatisfaction and you can see that there just has not been any money to transform the city.

Therefore I belive that Budapest is a very controversial city.

As you can imagine we also went to the Opera House and we went to see Gone with the Wind as a ballet. It was simply beautiful and those pictures will give you a little taste of it: 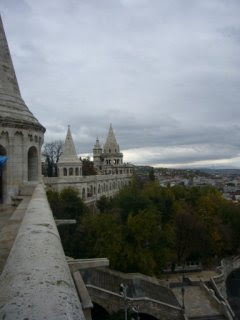 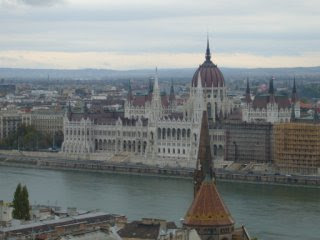 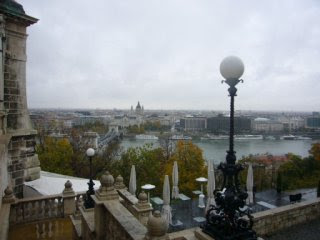 You walk into this Opera House and you cannot stop being astonished by its beauty. It's then you start imagining yourself into a romantic story... *sigh*... I'm not going into that topic any deeper now.

The last two days unfortunatley leave a rather bitter aftertaste, but nontheless I am not going to let that destroy my experience with Budapest.

Although at first sight you could say the city is not too beautiful, I do believe that its beauty can be found, but must be searched for in a different way.
Posted by Ramona at 2:42 PM No comments:

I really feel like writing right now.
This morning during my quiet time I just thought, life is good! We have an amazing God who cares. He cares. His arms are open... I've been listening a lot to the newest Phil Wickham lately and the lyrics strike me every time! Especially the song "True Love". Here's an extract from it: "The earth ws shaking in the dark. All creation felt the Fathers broken heart. Tears were filling heaven's eyes. The day that true love died, the day that rue love died. When blood and water hit the ground. Walls we couldn't move came crashing down. We were free and made alive the day that true love died."
Pretty amazing, huh? Walls we couldn't break came crashing down. We are FREE through Jesus Christ! aaaa... that is awesome!

Have I told yet, that I'm dancing again? Yes I am back to Jazz dancing. Can't explain how much I love it and how happy it makes me. I feel that dancing is the way for me to express myself in an artistic way. Training is pretty tough but I don't care because I just love it soooo much!
I'm also dancing a lot in my room lately. I don't know why... I just can't sit still when listening to some great music!

So... if you feel a little low today or mellow. Turn up the volume on some fast, crazy song... or better a worship song and just dance. Dance like crazy in your room. My promise... you'll feel great afterwards...

So far... Keep coming back to my blog... Love the Lord, love life, love your friends!

I love you guys out there... more than you will ever know!

PS: Watch High School Musical 2... awesome! Makes you wanna sing and dance... maybe that's why I've been dancing so much lately haha
Posted by Ramona at 3:30 PM No comments:

A whole new Me

I call this officially the beginning of Fall! While biking home from school today I got really excited about the beauty of it all. It was a beautiful, sunny day, the leaves already turned into colors and the chill air in my face. I loved it and it lighted up my heart and soul.
The summer after coming back from Santa Barbara has not entirely been good and rather filled with a lot of challenges. But life is a result of the decision we made. That's why I am doing good. Life ist good. God is good and I'm changing. I'm taking small steps.
I went through the dark valley for a while, but God's light guided me and I'm climbing the mountain. It felt a little like in Goethe's Faust when in the first Act after that night in his dark celler he is filled with new life on Easter morning. Well, Faust was besieged by the devil, which I am not so I can't really compare myself with it...
Anyhow... do you know the feeling when you go hiking up a really steep hill and you can see the end. You give everything, you're highly motivated. You don't know how much longer it'll take and when you finish climbing up but you know that the most beautiful view ever is waiting for you. That's where you will rest and enjoy the creation of the savior.
And that's where I am right now. Highly motivated to keep climbing up, keep pushing, keep going, keep trusting for I know that there will be a beautiful view and I will see clearly.
Posted by Ramona at 3:30 PM No comments: