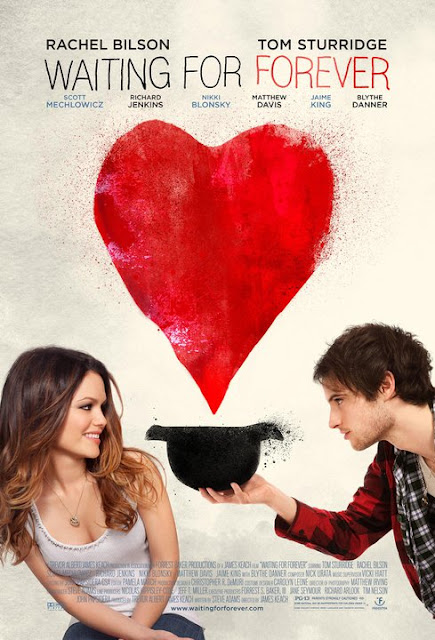 Sometimes you watch movies and they are entertaining. They give you the bliss of a moment where you enter a world of drama, romance, action or adventure. Everything ends happy and you are happy. We all long for it. We all long for this Epic.
And then there are movies which are different. They are special. They have you enter a world. Their world. You experience it with them. These movies don't need special effects or overdramatization or sexual content. They are beautiful as they are. Simple. And when they end you know something has changed. They describe our longing in a deeper sense. They touch your heart on a deeper level. They touch areas you didn't know existed.
Waiting for Forever was like that for me.

Here's the trailer. Be inspired.

Last weekend I went to our Capital. Berlin. I hadn't been there in over ten years (man does that sound old!) and I wanted to give the city a second chance to prove to me that it is beautiful indeed.
And oh did she redeem herself! Berlin is such an interesting city, such a green city and such a versatile city. It somehow had slipped my mind (don't know how that happened) how much history can be found there. On every corner, on every street are remainders and reminders of our history. And not only our history in the second World War but our history in the Cold War. The history of the Wall.
It impressed me and I again learned so much about my country again. I live so far in the south that we don't see these things everyday right in front of our eyes. So that was most definitley good. The first picture is a remainder of the Berlin wall, the second picture is of the Global Stone Project for peace. The third is of course the Brandenburger Tor. This is the memorial for the killed Jews in World War 2. It is very impressive. I just sat there and thought about it. It amazed me that in the center of a city they errected this memorial made of over 2000   of these. There was this light festival. It was beautiful with light projections everywhere on famous buildings and places. Here is says, "whithout him love would ony be half as beautiful." This is where we had one of the best coffees I have ever had. After that we went to the fleemarket, ate corn on the stick, listened to this 12 year old sweet boy playing guitar and singing and watched a British magician do his tricks. It was so fun and relaxing and good to be at another place for a weekend. Sometimes you just need to get away for some days.

Anyways, I had a wonderful time and will definitely return. Berlin, you are a beautiful city and I am glad I gave you another chance.

Today I want to share two songs with you I've really been into lately. Mostly because we dance to both of them in my dance class and that is why they mean so much to me. They're both by Adele.
I love both of these songs and interpreting them in dance brings out some interesting feelings but it helps you to just dance it all out and be in that moment. Anyways I know these are two very soft love songs that make you want to cuddle up with candles and cry and although I don't feel like doing that (the crying part) they somehow make me feel like Fall and lighting candles and dreaming of my future husband. And that is a good thing. To dream. And to hope.
xoxo
Ramona
Posted by Ramona at 11:07 AM No comments:

via
Posted by Ramona at 2:00 PM No comments:

"A woman in her glory, a woman of beauty, is a woman who is not striving to become beautiful or worthy or enough. She knows in her quiet center where God dwells that he finds her beautiful, has deemed her worthy and in him she is enough."
~ Stasi Eldredge

Email ThisBlogThis!Share to TwitterShare to FacebookShare to Pinterest
Labels: Fall 2011, inspiration, quote of the day, women A man with a guitar and dreamy eyes singing love songs gets me and melts my heart in an instant.
Yesterday my friend and I went to a Joshua Radin concert and I loved every single bit of it! I just stood there and soaked in the music, closed my eyes and even cried.
Find some of my favorite songs in the Current Soundtrack.

Ramona
Posted by Ramona at 4:44 PM No comments: All my life I have had this feeling in my gut that my life was about so much more. That my calling is so much greater than I can anticipate. That God has something planned for my life which I cannot even imagine.
Before this new season started I had the feeling that something beyond imagination was going to happen in the fall. That some of that epic is going to start. Then I started reading this book called Epic and it summed up what I felt my whole life. The series we do at church right now is called "Taming the lions" and somehow all of it fit into what I was feeling.
I believe we all long for it. That special something. That heroic act in our lives. When we watch movies there is always something amazing which happens. Something we sometimes don't dare dream about. Something we don't allow ourselves to hope in because we think this couldn't happen to us. I believe a lot of single women feel that way when watching movies like Pride and Prejudice. We dream and want this amazing man to win the world for us, pursue us and win our hearts. All to finish with an ... and they lived happily ever after. Then we look at our own reality and get disappointed. We don't believe anything like that could ever happen to us. I have talked with a few of my single friends lately and sometimes I can see and feel the frustration and I can relate. Because I too get frustrated sometimes. I too watch these movies and ask myself why this doesn't happen to me.
Yet I don't think that is the right question to ask. We should not ask why not, but what do I dream of? To be honest with you within the last weeks and months one thing I have learned is to dream again. To actually allow these dreams to take root. To allow these dreams to prosper no matter how high in the sky they might seem, no matter if they seem unaccomplishable. All I know is that I am dreaming these things for a reason.

Last week I watched the movie Gladiator again. I hadn't watched it in years but it was perfect timing. It summed it all up. We were created for so much more. I have always been completely in love with these epic movies. They trigger something in me. They trigger my desire for adventure. They make me want to save the world. I have this desire of doing something big and heroic. Not just for myself but for God. My whole life I have had this feeling about something big and heroic I am supposed to do.

And then life just somehow happens and we forget about it. We go about our normal ways, our routines and we lose that feeling. We grow up.
I don't want to become like that. Over the last years I have not dreamed like I am dreaming now. I don't want to get settled and comfortable and save.
I want to live a life that is on the edge, full of adventure and danger and victorious battles. I want God to look at me not only as His princess, His daughter, but also as His mighty warrior with whom He can conquer the world. A heroine representing His love and grace and faithfulness on the earth. Because merely do I live for myself. My life should not center around myself but around Jesus. The words of Maximus in Gladiator get me every time, "What we do in life echoes in eternity." ETERNITY. What word. What a thought.

And so I have jumped right into this season and I am on my way. The big thing might not have happened yet but it is on the verge. Every day is filled with amazing things. Every day I am learning new things. Every day I am becoming more the woman of God He wants me to be. Therefore even if I don't feel or see it yet it is already happening.

One thing I have learned already and with that I want to encourage you (especially the single women I have talked about) is that God wants us to experience this Epic. This epic love story. This epic life. Allow yourself to dream. Allow yourself to start seeing these things. Not only relationship wise but in every aspect of your life. Start living the epic and do not, please do not settle for anything less than what you dream of (I am writing to myself here... everyday I tell myself that!).

"This is what God says, the God who builds a road right through the ocean, who carves a path through pounding waves, The God who summons horses and chariots and armies— they lie down and then can't get up; they're snuffed out like so many candles: "Forget about what's happened; don't keep going over old history. Be alert, be present. I'm about to do something brand-new. It's bursting out! Don't you see it? There it is! I'm making a road through the desert, rivers in the badlands." - Isahiah 43:16-19 The Message

PS: The new music in my Current Soundtrack is the language of this season